Increase your conception and creativity with Coaching 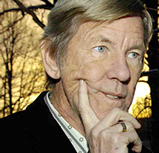 A few days ago we had a chat with Lars-Eric Uneståhl, one of the Swedish International Coaching Community (ICC) certified trainers in Coaching, Founding President for the International Society for Mental Training and Excellence and current President of the Scandinavian International University in Sweden.

He developed the “Swedish model of Mental Training” in the nineteen sixties and was at that time in close contact with Milton Erickson, Virginia Satir and Timothy Gallwey. Since then he has also contributed actively in the development of Coaching and NLP.

What is your opinion about Coaching, what is Coaching for you?

Coaching has many meanings for me; one is selfCoaching, which is an important part for my own development; time, not only to my conscious part, but also my unconscious part.

And these questions to myself, which have to do with the unconscious part are a very important way for me to use Coaching for what Kahneman calls “slow thinking”, when it’s a matter of problem solving, where you don’t have to make a decision right away, but you can wait a little for the decision. By putting a question to my unconscious, I can just wait for the answer to come after some days or sometimes even weeks. That’s one way of using it.

The other way is, of course, to have clients, both direct clients and in education. So there are three parts: myself, the client and education, having Coaching courses. I think Coaching is a wonderful method, I work with a model for change where the “C” in “change” stands for Coaching, this is a method of change; “H” stands for hypnosis, which is a state of change; “A” stands for acceptance, and commitment training, which is the model for change to accept the present and go for the future, like in Coaching; “N” stands for things like Neuro-imagery methods or NLP; “G” stands for generative images, and images are a very important part for this kind of training; and the “E” stands for emotion training.

So that’s a model where Coaching is one part in an integrated model of change. And the benefit of Coaching is also that it’s easy to learn, easy to apply, and the effect is astonishing for most people; because it seems to be too easy a method to provide radical change, but when people start to understand and to try Coaching, they realize that the effect is much bigger than they thought at the beginning. So, it’s easy to surprise people by this method.

When Coaching became to be known and popular twenty years ago, many people started to call themselves coaches because it became modern to be a coach; so, even if they didn’t have any education in Coaching, it was easy to call themselves coaches, because it was attractive. And that was very bad because it gave Coaching a wrong reputation. Newspapers, for instance, they hired a coach and the coach was there to give people advices for questions they sent, so that was not good.
But after some years, the requirement was that you needed an education to call yourself coach. Then institutes became very popular in many countries, which educated coaches in two weekends or one weekend, and that was not good either. So, after some years, people started to ask, “do you have an education? From where do you have an education?” And then the requirements became to have an education that had a good standard; and then the two international, ICF and ICC, became the choice for many people around the world.

And so, the last ten years, I think, we’ve had in ICC a big use of these requirements for having an education that has a high standard. And because it’s international and because it’s the same all over the world, then it’s easier than in ICF. There’s also a nice standard in ICF, however, the education can differentiate from person to person because the requirement in ICF is that the person who gives the education should be approved, but no the content of the education. Here, we have an advantage in ICC, that we have a good quality in the education. That’s maybe why we have this EMCC award also.

For instance, if you take the first part that you make the goal setting, in traditional Coaching it just makes intellectuals; you find the goals and you start to work towards the goals by planning.

In mental training we go further, we translate the goals to images, and we program the images in the “mental room”, which starts the driving force towards the goal without having to think about it. So, it’s an automatic process where the goals become directing factors for the automatism of life! This is a very fascinating area where we not only work consciously towards the goal, where we are automatically directed to the goals.

So this combination of Coaching, Coaching goals, traditional goals setting with the goal programming is a very nice combination.

So step-by-step, if we take the coaching procedure, every step can be enhanced by mental training.

Image is the holistic concept, it’s not only pictures, it’s all the senses which are there, with feelings… kinesthetic feelings, auditory, and so on. I found that when I look into the brain, that the brain changes into a holistic brain state, where the EG activities are the same in all parts of the brain, then all four quadrants get the same basic activity. So the brain starts to work as a holistic unit. That’s why images are so effective in mental training, because the brain receives them in a much better way.

And what is the difference between mental training and NLP?

NLP is more of a toolbox, where, in order to find ways to change the state, just now, I want to break my state of mind, and NLP has some very interesting methods. While mental training is more about providing changes which are there without thinking about it, like I said, if you want to change self-esteem, or my optimistic attitude, this is not something which is just related to this situation, but to every situation.

Long-term changes, it’s the same in sport: you can find methods, you can change your performance just now, but if you want a more steady increase in your performance then you need another formal training to automate your learning; but it’s a very good combination of NLP and mental training, and Coaching.